You are here: Home / Archives for bison bede compact 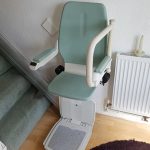 The Bison Bede Compact was one of the first stairlifts to use a compehensive set of diagnostic fault codes. Instead of just informing the user or engineer of an activated safety edge or stop circuit, this stairlift could also diagnose earth faults and pcb errors.The Bison Bede Compact stairlift was fed power via an umbilical cable on both the A/C and D/C model. When the Bison Bede 50 stairlift was released there were no umbilical cables but instead it used charging points which were located at … END_OF_DOCUMENT_TOKEN_TO_BE_REPLACED

We use cookies to ensure that we give you the best experience on our website. If you continue to use this site we will assume that you are happy with it.OkNoPrivacy policy